A group of Doctor Who fans need your help.

1. I have written a show about fans, fandom, gender politics and Doctor Who - and it's playing at Edinburgh Fringe in August!

The show is about a woman who likes to dress up as male characters at conventions, including as Peter Davison's Doctor (see poster image below) and a guy she meets who doesn't think a woman should be the Doctor.

2. We're running an Indiegogo campaign to help with costumes, publicity and part of the venue hire. And there's only 48 hours to go and we're a long way from our target.

If you can help out with a little bit of money - or to spread the word in these final two days, I'd be really grateful.

We're putting a lot of time and money into the costumes, because that's what fandom would want! We also need money for posters, flyers and some for our venue. 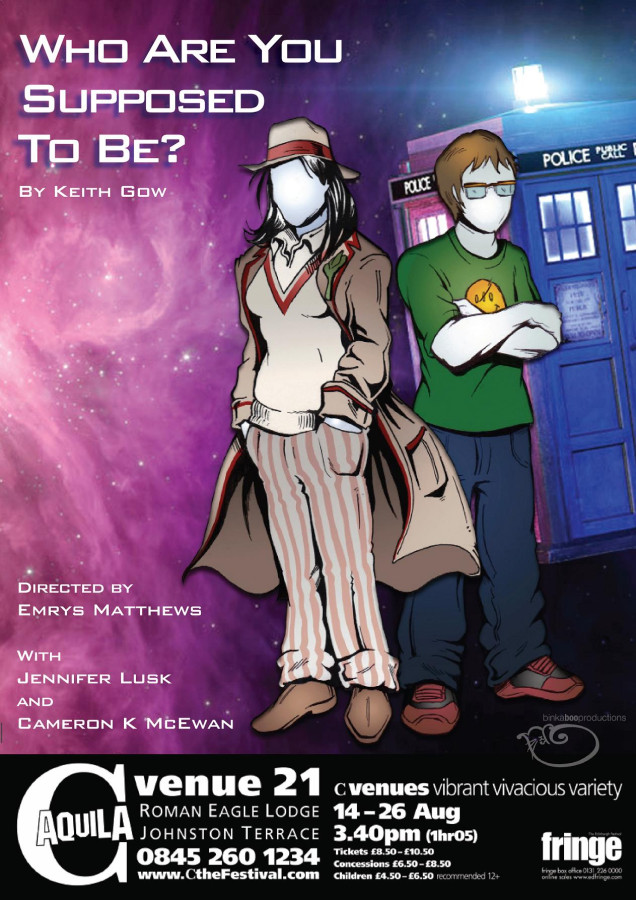 We've had some great press from Doctor Who blogs, Edinburgh press, Den of Geek and today we were named one of the "Top Australian acts at Edinburgh Fringe 2013".

I'm really excited for the show - and for the possibility of touring it later this year and next year. But we need funds to help! We're already planning Manchester in November and London late this year or early 2014. It's a two-hander and really portable; I can see it playing at Fringe festivals and Conventions all over the world!

The better reception we can get at Edinburgh Fringe, the better set we'll be for the future.

If you can make it to Edinburgh from Aug 14 to 26, come along! If not, give a little money and we might see you around.